1. intransitive verb; To deviate from the proper course, especially without a fixed purpose

2. noun; a domestic animal found wandering at large or without an owner

I wonder if stray cats are aware that they are deviating from the proper life course set for them. Do they worry to themselves, “what is the purpose of my existence?” as they squat for a poop in my garden?

Perhaps stray cats feel their lives are devoid of purpose, or maybe they find consolation in the freedom they have to venture wherever they wish, sleep wherever they see fit, and poop in my garden whenever they please.

Some may feel this gives cats too much credit; Rather than believe cats are able to pose philosophical quandaries*, many believe cats are simple creatures, surviving day-to-day by using purely instinctual behavior, like most of the contestants on ABC’s “The Bachelorette.”

Some people, such as the late/frozen Walt Disney, believe cats live lives much like our own and even play in jazz bands when humans are not around.

Regardless of whether cats are brilliant or bumbling, they all have smelly poo. Some readers may recall that I have already discussed cat feces in My Cat’s Breath Smells Like Newman’s Own, so I will not harp on the subject because it makes me gag.

(For anyone who is concerned that I talk about cat poo too much, I blame the media and advertisements like the one below, for spending millions of dollars to constantly expose innocent minds like mine to the subject, kind of like Joe Camel and cigarettes… )

I simply wish to delve into why our neighborhood was the only one in town on the Fourth of July that did not smell like grilled hamburgers and hotdogs, but rather smelled like a port-o-let on day three of a church festival.

My wife and I are very fortunate to have caring neighbors. I feel like we could ask them for anything and they would oblige. Anything, that is, except to stop feeding the God-forsaken stray cats.

Four different households in our neighborhood are so caring that they put food out every day and have even trapped all the strays, paid for them to be spayed or neutered and had them treated for worms and fleas. The costs have to be enormous, but all of our neighbors lovingly continue to maintain our stray cat paradise.

The problem with spaying and neutering cats is that they still use the restroom all over the place. Not to mention these cats are not friendly; In short, they are angry feral cats that happened to have their private parts removed. I would have chipped in money to give them all an ostomy while they were in surgery, but nobody thought to ask me.

I am truly fed up and have decided to take decisive action to protect my home, my family and my land the way early Native American tribes protected their families from hungry wolves and pioneer settlers that pooped in their gardens.

Unlike the early Native Americans, I will not use a bow and arrow (my compound bow), rifle (my bb gun), or tomahawk (my lawn-mower) to eradicate the invaders. However, taking a lesson from the Native Americans I will also not make peace with the cats and continue to be pooped on over and over again.

The challenge was to create a Good Idea that would keep strays away from my garden without injuring them in any way. To prove my benign intentions, I have included this picture of me and my cat sharing a special moment:

Considering the Navy SEAL’s recent historic accomplishment of finding and eliminating Osama Bin Laden, I started the process by contacting my good friend Brett, a United States Navy SEAL. He advised me that to complete this challenging task, I needed to create the Good Idea in several well-planned and executed phases.

So far, I have only completed Phase 1, but it is an integral part of the operation.

I was advised to create a multi-faceted database to identify the true culprits, because maybe one or two cats had claimed our yard as their personal litter box. I found out almost every stray cat (and possibly the mail man) is guilty.

The names listed on the database below are what my wife and I, as well as our neighbors who also dislike cat poop, have given the stray cats because we talk so often about how much they bother us.

Having identified each of the strays, I can see that I have quite a task ahead of me in Phase 2, which is designing and planning the Good Idea that will eliminate the nuisance.

If in the meantime any certain aforementioned Navy SEAL feels so inclined to come to the neighborhood and do some recreational target practice, I may be serving his favorite dish every night for the next couple of weeks for no reason in particular. 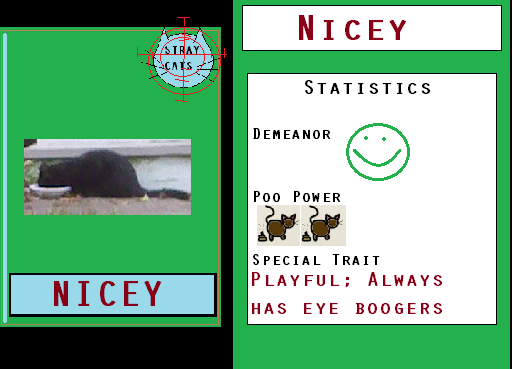 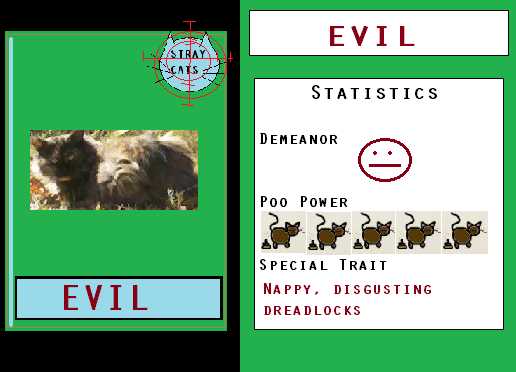 One thought on “Operation:Boo-Hiss-Run Phase 1”