John G and the Four Seasons

Spring in Cincinnati is my favorite season, followed by Autumn, Christmas, Summer, and finally the rest of Winter. Summer is so far back on the list because I get burnt even when I wear spf 50. This is the tactile equivalent of spreading Marshmallow Fluff all over myself, and it takes just as long to rub in. I tried using spray-on lotion to save time. Due to its watery consistency and my back sweat from building a sandcastle for an hour,  I looked like I was taping a commercial for a new coconut flavored Gatorade (or sweating milk.) If you cannot picture this image, that is probably for the best.

Over time I have learned that the parts of my body I cannot reach happen to be the most painful parts when sunburnt. I think the worst part of a sunburn isn’t even the searing pain; it is  the inability to sleep because the fan that I need to cool my skin is concurrently giving me frostbite. I always felt bad for the Fantastic Four member Johnny Flame, because he probably has a hard time sleeping too.

I do not understand why I get so burnt because the rest of my family tan quickly and evenly.  I was glad when my brother and sister-in-law had a baby, because I knew I finally wouldn’t be the only pale one at the rest stop on the way home from family vacation.

Even when it is not summer, I often get asked if I have been out in the sun because I have permanently rosy cheeks.  People assume that I have been out in the sun, or got wind burn from skiing. I don’t mind these assumptions, but I do get aggravated when my rosy cheeks lead people to assume I am embarrassed by the interaction I am having with them. This is why I have always started job interviews by explaining that I am not nervous or embarrassed, I’m just a genetic freak of nature.

In high school I attempted to investigate which of my ancestors had rosy cheeks. The problem was that after one generation, the pictures became black and white. As a result I was unable to tell which ancestor looked like they ran four miles to get into the picture like I do every time I am in a picture. At one point I considered only being in pictures taken with digital cameras that had the “black and white” or “sepia” effects, but it was hard to find excuses for using these effects after a while. Apparently there is a limit to how many times my friends will dress like cowboys or gangsters.

When the trail ran cold I decided to start at the beginning;

If we came from monkeys, I wanted to find where this trait originated. Here is what I have found so far:

These are a strong, handsome, innovative species. Unfortunately my wife pointed out that Macaques have a full, thick head of hair. Powering forward, I found the next candidate:

2. Red-Face Monkey
I was ready to accept that this was my ancestor, but once again my wife pointed out that even though the hair and face were right on, this
species is known for their excellent eye sight. Once again I continued my search:
3. Capuchin

After finishing my research successfully, I am pleased to know that my ancestors are considered the smartest species of monkey, and one of the only species to have figured out the use of tools. I bet my great, great, great, great, monkey-grandpa had the Good Idea to smash nuts with a rock.

After thousands of years of evolution, I look only vaguely similar to my Capuchin ancestors, yet people still point out the similarities. I have found that people’s comments about my face often inadvertently reveal something about themselves.

While in line at FedEx the other day, an intimidating, tough-looking,  middle-aged woman dropped a box of envelopes (I am not one to jump to conclusions, but I can only assume she was planning ahead for when she has to write lots of letters in prison). I bent over and picked them up for her, and when I stood up she said “thank you cutie,” then said to her friend, “oh look, I made him blush!” Then she laughed, and sounded like Patty and Selma from the Simpsons. I realized everyone at FedEx thought I was flirting with this woman now, so I quickly took the box back from her and punted it across the room. Obviously I did not do that, but I pictured doing it, over and over again.

I Haven’t Been Outside,

Some comments are much more benign revelations, such as when a nurse I was working with recently saw me and asked “Oh, were you at the Reds game last night?” What she revealed to me without actually saying anything was that the only time she goes outside long enough to get sun is when she goes to Reds games.

And I am Completely Comfortable.

My favorite story happened in the library when I made eye-contact with a pleasant, heavy-set woman who was working next to me. I smiled politely at her, and then defying all social norms she loudly whispered:  “I know! I am sweating bullets! It is so hot in here!” First of all, the phrase “I know” is typically used to agree with a prior declarative statement, and I had not said a word. Secondly, my face is not a thermometer, and assuming I’m hot because my face is red is like assuming there is a food court in the library because she was overweight. Thirdly, I would have rather remained ignorant of the sweat on her brow, of which I became exceedingly aware for the next hour. Of course, I said none of these things to her and just politely nodded in agreement, even though I was kind of cold.

What I have taken from my experiences is that one should never make assumptions about a person based on a physical characteristic, no matter how obvious it seems. If assumptions are made, the effects can be disastrous. Those who know me know when I’m sunburnt, know when I’m embarrassed, and know when I just ran 4 miles (never).

Even if my face wasn’t always red, and even if sunburns did not exist, I still would choose Spring over the other seasons. Along with the more forgiving sun, I enjoy the occasional thunderstorm, unless it’s too loud then I hide under the bed with my cat. There is also still a slight chill in the air, the ice cream man warms up his rusty truck, and flowers begin to bloom.

When is a Flower a Weed?

It is a shame that she does not love Dandelions because our yard is full of them, and we get them free from the rental property next door. Why can’t Peony seeds blow from the rental property and fill our yard? Dandelions are amazing plants though; They have a pretty yellow flower, they provide hours of entertainment ( if you like blowing the white seeds into people’s yards, like the kids at the rental house next door do), and Dandelion greens apparently have a lot of medicinal and nutritional benefits. Who decided that they were a weed anyway? Probably the person who discovered the Peony, so he or she could sell it to my wife for a ton of money.

How To Make Your Garden Glow

I tried to surprise my wife by planting a bunch of Peony and Lily of the Valley bulbs this Spring. I learned the hard way that she likes flowers, not bulbs. Especially not bulbs that don’t bloom. I might as well have bought her diamond earrings and buried them somewhere in the yard so she couldn’t find them. One Peony bloomed for two days.  Money well spent…

This is where my Good Idea happened. Not only did I want to make sure we had a beautiful garden, but unlike normal gardens, I wanted to be able enjoy mine at all times, including at night.

I bought solar lights on sale, used some scrap wood and metal, cut out some colored plastic wrap, and in no time the Midnight Garden was brought to life. Not only does it cover my ugly compost heap, but it uses no electricity! Al Gore would be proud of my Good Idea, and maybe he will read this and tell me that it is just as good as his Good Ideas, which include the internet and global warming.

Here are the steps: 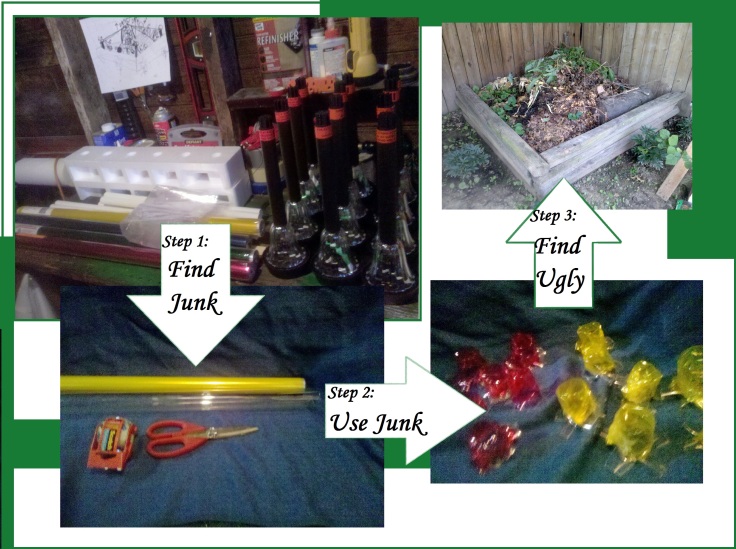 Now comes the big test of just how good this Good Idea will be. Hopefully my wife will get very excited about having  her own Midnight Garden and she will want to show it off to all of her friends. She might even have a party! (I know I would if I were her.) Maybe when I show it to her she will kiss me on the cheek, but she won’t be able to tell if I am blushing, because I am part Capuchin.

One thought on “Inch By Inch, Glow By Glow”